Drag racing is one of the most intense forms of drag racing. Two cars with 10,000 horsepower engines line up at a starting line, move into position, and then blast off, going from 0 to 300 miles per hour in just under 4 seconds. After each run, the engine is dismantled, most of the moving parts are replaced, and the engine is rebuilt, and tested before the next run.

When the race is on, a thousand things can go wrong with the car, especially the engine. One of the most common pieces of equipment to go wrong is with pistons. Top fuel and funny car pistons generate 1,250 horsepower each. If they aren’t aligned right, aren’t lubricated enough, or something is wrong, that can cost the driver a win or even a championship. This example is a piston head used and autographed by Brandon Bernstein.

It was only used for one run, but shows some light use, and is in good condition.

Now let’s look at an interesting Del Worsham piston from 2002.

The story behind this piston is interesting. At the 2002 Checker Schuck’s Kragen Nationals at Firebird International Raceway, Del Worsham beat John Force in the final. Worsham temporarily denied Force his 100th event win. This mangled piston wrecked the engine block during that run. The piston chewed the block and itself up during that final run. Part of the piston arm is still wedged inside the piston, and one side is almost completely gone. 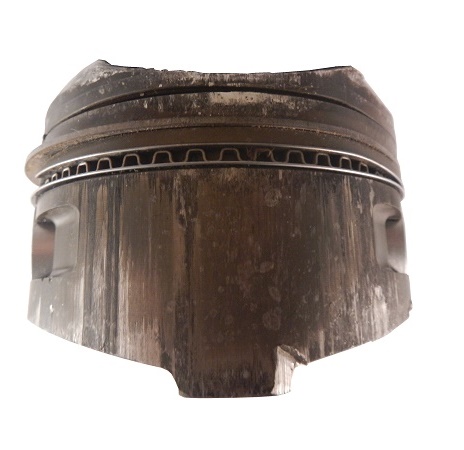 Savagery and speed are one in the same. This kind of wear happens a lot on NHRA cars, and we will look at some more parts next week.