Owensboro, Kentucky plays host to the Green family, David Green, Jeff Green, and Mark Green. Jeff and David are the only pair of brothers to win Xfinity Series Championships, David in 1994, and Jeff in 2000. David won the 1994 Championship after only winning one race, the 1994 Goody’s 250, and he did so while racing the Bob Labonte owned #44 Slim Jim Lumina. The Slim Jim Lumina is a classic look, where every part of the car works, the color scheme is not over designed, and the car looks great, and earns an A.

Editor’s note, I will be away on vacation until August. Here is a Friday Feature to tide you over.

This week, we take a look at a suit feature that is unseen by most race fans. Every suit has one, the so called “Liability Tag. ”-Every piece of racing equipment has some form of “liability tag” which basically states that anything that happens to the wearer of the item is the wearer’s fault and not the company’s fault. The Simpson tag, which has remained virtually unchanged since the 1980’s reads as follows:

“Warning-Auto Racing is Hazardous-this Article is sold without warranty expressed or implied. No warranty or representation is made as to this product’s ability to protect the user from any injury or death. This garment is made of Nomex and other flame retardant materials. Even with the high quality of this garment there could be fires or circumstances where this garment will give only minimal protection. Nomex underwear should be worn under this garment. This garment is manufactured to comply with the rules as set forth by S.C.C.A., N.A.S.C.A.R. , S.F.I., F.I.A., and other regulatory bodies.”Cleaning Instructions” Dry clean only. Dry clean alone. Specify using perchloroethylene only.”

Sparco’s tags are located behind the zipper andhave two different statements. Older suits have this tag:

“Although this product is manufactured from special materials that satisfy certain safety standards and may carry the approval of various authorities for its use in specific circumstances the manufacturer or supplier can not be held liable for its protective qualities under all activities, circumstances, and conditions.” 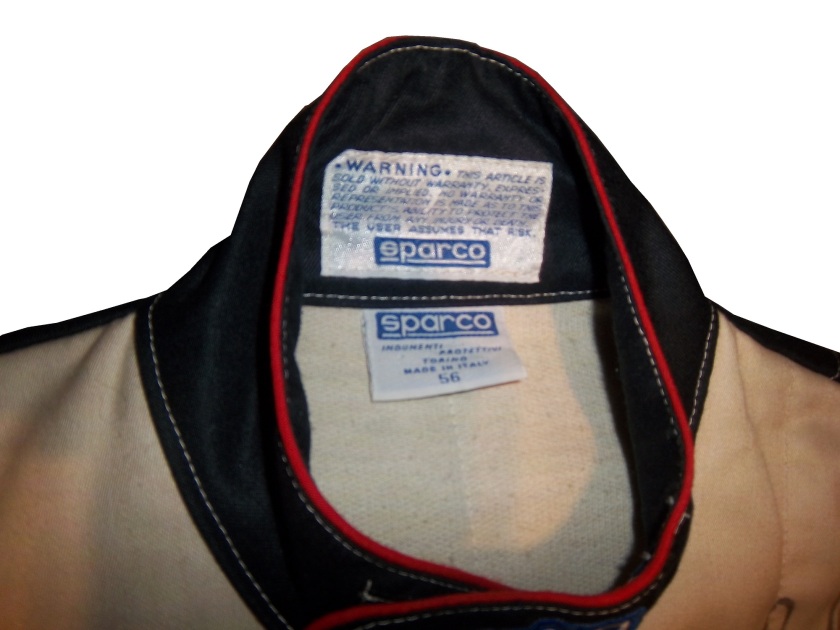 Newer Sparco tags have this warning in both English and Italian:

“It is important to carefully read the user’s handbook concerning the care of the garment. This suit will offer protection from fire and the transmission of heat for a limited time, but it does not offer total protection against any kind of hear or fire. The fabric used to make this suit is subject to aging. It is recommended that the suit is inspected frequently for any signs of wear or damage that may result in a loss of protection to the wearer. If the suit has been worn extensively and shows signs of war or damage it is recommended to wear another suit. Sparco is not responsible for any damages the suit incurs from improper use of the suit bu the user, or any third party. Through improper care of the suit, misuse of the suit, or discoloration of the suit from perspiration, or any use of the product after the expiration date, as described in the instruction manual. Do not leave this garment under sunlight, or any artificial light. This suit is not intended for use in go-karts.”

Impact! Suits use this simple warning:

This is by no means unique.  Almost all sports equipment to a certain extent has this type of warning.  This example is from an XFL helmet.

Jacksonville, Florida’s own Patty Moise has raced in NASCAR for many years. She didn’t win a race, but has a few top 10’s in the Xfinity Series. In 1994 and 1995, she raced the Purex Thunderbird for Doug Taylor. I like the shades of blue and red, and the design is decent. My only complaint is that I think the white stripe between the two isn’t needed, and it’s visually distracting. Other than that, it’s a great scheme that earns an A-.

Corpus Christi, Texas can be proud to call Terry Labonte a son. A two time Cup Champion, with 34 wins across all three of NASCAR’s top series, Labonte is one of the most underrated drivers in the history of NASCAR. In 1993 1994, and, he drove the #14 MW Windows Chevy. The 1993 MW Windows Lumina is all white with a series of red stripes on the sides, which wrap around the front. It’s a great look, with a great color scheme. A

Editor’s note, I will be away on vacation until August. Here is a Friday Feature to tide you over.

I must have said the word Nomex a thousand times on this blog, but what exactly is Nomex? In short, it is a flame-resistant meta-aramid cloth material. It is an aramid material, which is the same thing as Kevlar, but it is not as strong as a bulletproof vest, but it has great thermal, as well as chemical resistance, which makes it great for racing firesuits.

The development of the Nomex firesuit has been a long road. This road has seen its share of driver deaths and injuries. Before the Coca Cola 600, I discussed the deaths of Fireball Roberts, Eddie Sachs, and Dave McDonald in fire-related crashes over the course of 6 days in 1964. What took place from there would cross the paths of racing and a young drag racer.

Bill Simpson was born in Hermosa Beach, California in 1940. He took up drag racing at a young age, and at age 18, broke both arms in a drag racing crash. As he recuperated, he thought of safety in racing for the first time. He developed the idea of an X shaped parachute, and using materials from his uncle’s army surplus shop, developed a functional drag racing parachute. Don Garlits noticed the new parachutes, and took an interest, which helped the Simpson Drag Chute company to form. As time went on, he started making other racing equipment, which caught the attention of drivers, and, oddly enough, NASA. During a project, he met Pete Conrad, who introduced the now 27 year old Simpson to Nomex in 1967.

Nomex was created in 1967, for NASA. Far from the uses it has today, its main use at the time was for the Apollo Command Module parachutes. NASA needed a material that could stand up to the heat of reentering the earth’s atmosphere, and still remain fully functional. Simpson saw what the material could do, and decided it would work well to make driver suits, and other uniform items.

Contrary to what most people think, Nomex is not fire PROOF, rather it is fire RETARDENT. It does burn, but burns at a much slower rate, and that protects the driver in the event of a fire. Bill Simpson decided to show how much better this material was by having a “burn off.” He put on one of his Simpson racing suits, doused himself in gasoline, and lit himself on fire. Though he was fully engulfed in flames, he was not hurt. Though he admits that is was a bad idea, it sold drivers on Nomex. Even today, 46 years later, Nomex is still the go-to material for driver suits.

Nomex is used for many other things. Nomex sheet is used in power cords for insulation. Fire-fighters use Nomex for protection in saving lives. Fighter pilots wear Nomex suits in case of cockpit fires. Nomex was developed for NASA and NASA still uses a lot of Nomex. It is used in what NASA refers to as the “Thermal Micrometeoroid Garment of the Extravehicular Mobility Unit”, or in regular English, the “outer layer of a spacesuit.” The spacesuits that space shuttle astronauts wore on liftoff and touchdown were primarily made of Nomex. Almost every project that NASA has done in the last 40 years involves Nomex in one form or another, so it is a very versatile material.

Interestingly, as safety concerns increased, and safety equipment changes for the better, you begin to see that Nomex is beginning to have competition in the driver suit market in terms of fire protection. While I’m typically a traditionalist when it comes to sports uniforms, for driver suits that is a great thing. Developing a new material that serves the same purpose as Nomex, but can do it better and longer is a great thing. Eventually, Nomex will go the way of typewriters, film cameras, the printing press, and the floppy disk as an invention that is obsolete but changed the world. Friday Feature to tide you over.

For the next set of Throwback Thursday, we will focus on the Xfinity Series. Hailing from Vallejo, California, Jeff Gordon has raced in NASCAR for many years, and has had a lot of success. Almost all of Gordon’s success came in car #24, but he had a little success in the #1 Baby Ruth Bill Davis Thunderbird in the Xfinity Series, which accounts for three of his five Xfinity Series wins. The Baby Ruth Thunderbird is an amazing look, with a great color scheme, and a subtle design scheme. All in all, this earns an A.