Some race car drivers are born, other as made. Racing school is a place for driver to hone their skills. John “Skip” Barber III is a former F1 and SCCA driver. While we won 3 SCCA National Championships in a row, his F1 and IndyCar careers were not stellar. After his racing career ended, he taught four students to race in 1975. 45 years later, Skip Barber Racing Schools owns 130 cars and operates at over 30 tracks over North America. They are one of the best-known racing schools of all time.

Fire is an ever present threat in auto racing, including auto racing school. Skip Barber issued suits to their students. These were lightweight, and were inexpensive. This 1980’s-1990’s Pyrotect suit is one example. The suit does show decent use, not surprising for a lightweight suit.

The collar has a Velcro closure, and a PYROTECT logo is sewn on the closure. There is nothing inside the cowl. 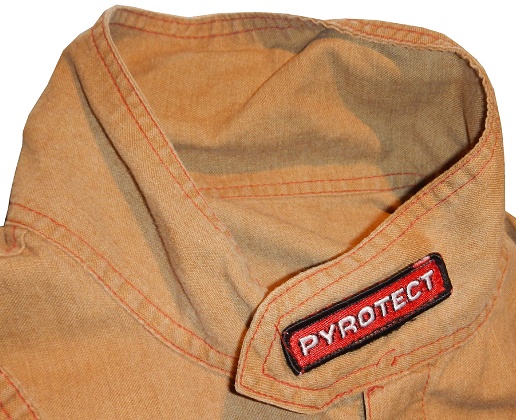 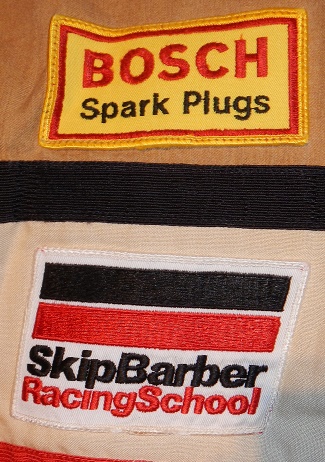 The warranty label and the wash instructions are located inside the front of the suit.

The belt on the suit is unadorned on the outside, but there are a couple of red patches sewn inside the belt, indicating this suit is number 48.

The tan legs have standard cuffs, and a red stripe.

The shoulders have straps to help pull the driver out of the car in case of a crash.

The right sleeve has PYROTECT and PBI patches sewn into the white stripe. The end of the sleeve is unadorned.

The left sleeve has PYROTECT and PBI patches sewn into the white stripe. The end of the sleeve is unadorned. 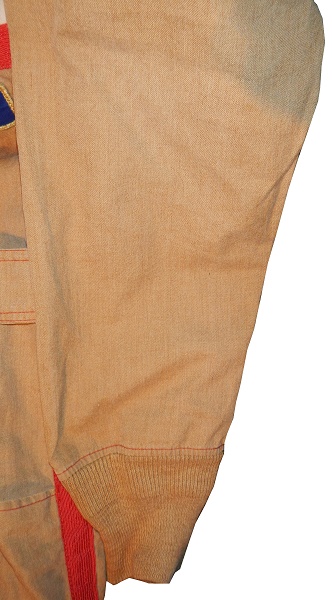 The back of the suit shows some wear in the form of stains and scuffs.

The back of the neck is unadorned.

The back torso features a large SKIP BARBER RACING SCHOOL patch sewn into the upper part, and a BF GOODRICH T/A RADIALS patch on the lower part of the torso.

Next week, The Vest Project continues!