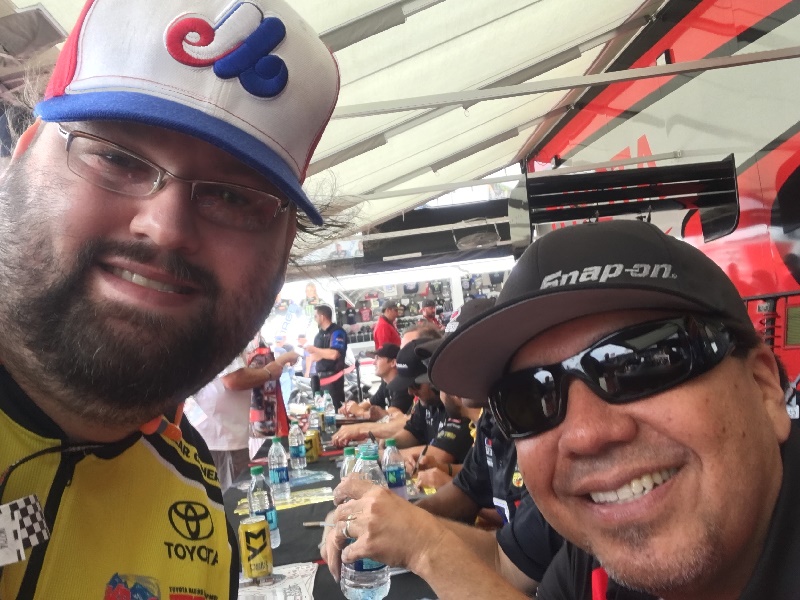 Before we dive into this weeks Friday Feature, I want to discuss why I reposted an old article last week. As happens sometimes, I had to deal with a couple of minor things last week, and I didn’t have enough time to get to the Friday Feature. I hate doing things this way, but real life gets in the way. Now on to the Pedregon Brothers!

When “Flaming” Frank Pedregon passed away in 1981, he had no idea his sons would become some of the most respected drivers in Funny Car. Fast forward to 2019, and one son Tony has 43 event wins, fourth on the all time win list, and two championships, and the other Cruz has 33, and two championships, including the only Funny Car championship not won by John Force in the 1990’s. The Pedregons have gone down as one the greatest families in the history of drag racing.

The first brother to have real success in Funny Car was Cruz. He started racing in 1987 in a top alcohol dragster, moved to top alcohol funny car, then to top fuel in 1991, and in 1992 won the Funny Car championship. The biggest rivalry in drag racing in the 1990’s was John Force vs. Cruz Pedregon. Both were driving Pontiac Firebirds for a while, with Cruz driving this Interstate Batteries/Hot Rod car, represented by this 1/32 die-cast.

John Force was not going to be denied, and decided to get in Cruz’s head by hiring Tony as a driver. By 1993, both Pedregon brothers were racing in full time funny cars Tony and John did not have the best of relationships. Both John and Tony were racing the same design car, but Tony would have to, on occasion, throw a race for John. This is a 1:24 scale mock-up of his Castol funny car from his days with John Force.

In 1998, Tony won 2 events, one at Texas, the other at Denver. During that season, he wore these Simpson Holeshot drag boots.

These boots are unlike most racing shoes because they are designed to cover both the shoe, and the end of the leg of the driver suit. Why would funny car drivers wear such boots? Well, to answer that, let’s look at the design of the inside of a funny car.

The driver sits almost on top of the rear axle, with the 10,000 horsepower engine, and nitromethane fuel tank directly in front. Should there be an engine explosion, which isn’t uncommon, the fire would blow back into the driver. There are firewalls in place, but those can’t always be counted on to protect the driver from the full effects of fire in the time it takes to get a funny car stops. That’s where these boots come in. They will give that little extra bit of help to the driver in exiting the car.  They are rated 15, not bad for 1998 standards, but would have a 20 rating in 2019. Both boots have been signed by Pedregon and he added the inscription “’98.” 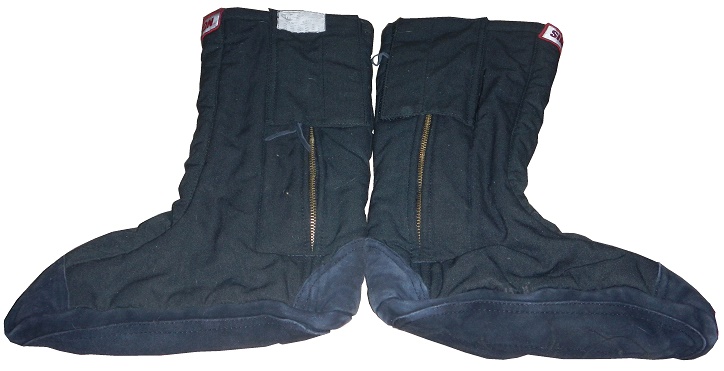 In 2002, the Pedregon brothers formed Cruz Pedregon Racing, Inc., and both have had driver duties. This visor was used by one of the brothers, and autographed by both. It’s designed for a Simpson Bandit-style helmet.

“I did, but honestly, to me, if your susceptible to that, you probably have something else going on. Part of your God given ability to focus, to me should be, even if something is in your vision, your focus should be the thing you are focused on, not things on the outside. I did try that at one time, and all it did was verify that I’m really screwed up.”

I also came across this Cruz Pedregon race-used visor. It’s a Simpson visor, which shows a number of scratches, and scuff marks, and Cruz has autographed the visor with the inscription “2X FC CHAMP!.” 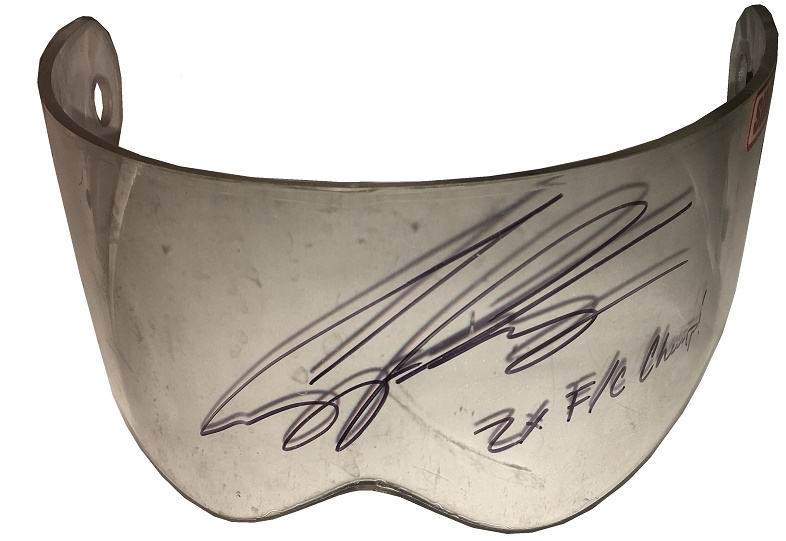 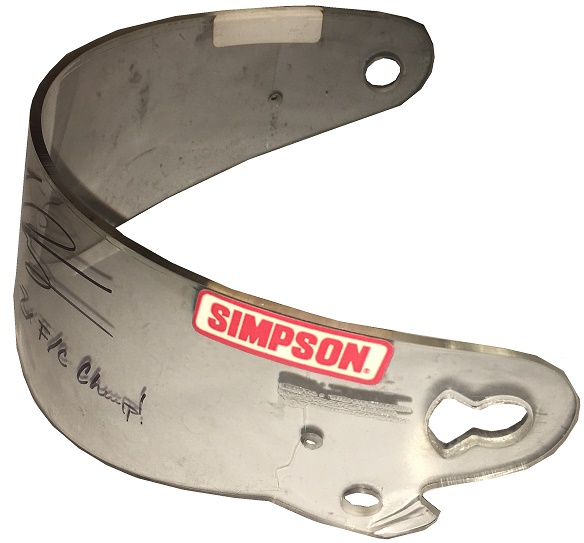 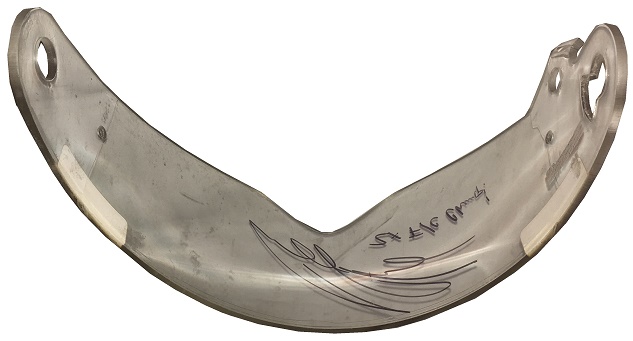 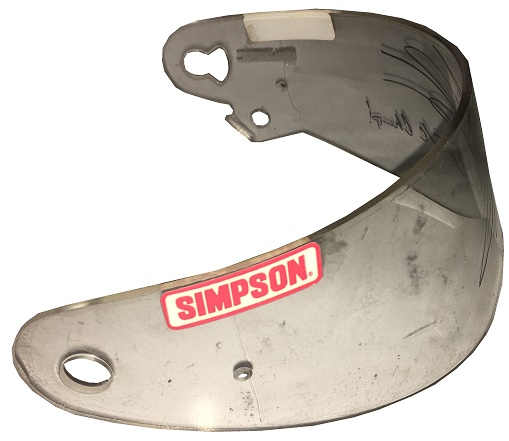 The last item is a parachute bag used by Frank Pedregon Jr. It’s designed to hold the parachute on the back of the car, and was from the car when Frank hit Scotty Canon. 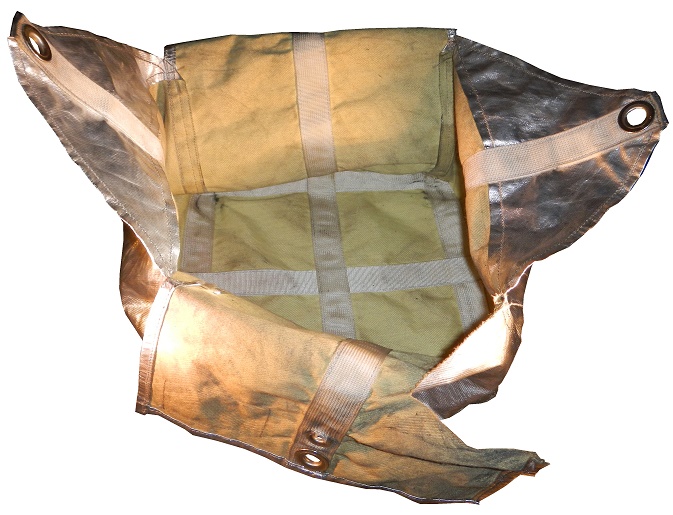 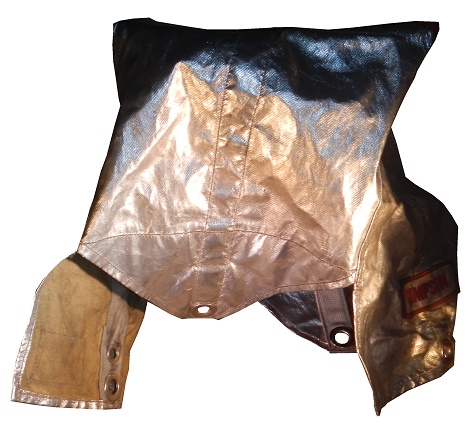