Every sport has that one driver who is a true great, but never could win a championship. Baseball has Ted Williams. Football has Dan Marino. Basketball has Charles Barkley. Hockey has Joe Thorton. NASCAR has Mark Martin. IndyCar has Hélio Castroneves. Formula 1 has Stirling Moss. Up until the end of the 2016 racing season, Ron Capps could be considered this for the NHRA. After 10 years of racing in Funny Car, and so many close calls, Capps finally scaled the mountain, and won the 2016 NHRA Mello Yello Drag Racing Series Championship.

Ron Capps broke into the Mello Yello Drag Racing Series as a Top Fuel driver for Roger Primm. He would win his first race in Seattle that season. In 1996, he was signed by Don Prudhomme, and ran six races, though he did not qualify for two of them. In 1997, he switched to Funny Car, and raced for Don Prudhomme until 2005, when he signed with Don Schumacher Racing. In 2008, he signed a sponsorship deal with NAPA Auto Parts. In 2016, he finally climbed the mountain and won a Funny Car Championship.

2016 was not an easy season, he had a lot of competition from the John Force Racing teams, as well as other Don Schumacher Racing cars. But he had 5 wins, Winternationals, Epping, Englishtown, Norwalk, and Seattle, 5 runner up finishes, and four number one qualifiers. He also passed Cruz Pedregon for 2nd on the Funny Car all-time win list with 49. Though he didn’t win the NHRA Finals, he did win the championship at the final race in Ponoma. One of his crew members was given this white championship hat.

The cap is in great condition, showing no signs of wear. The front has the newest NHRA Mello Yello Drag Racing Series logo, introduced earlier in the year.

The left side features a FUNNY CAR CHAMPION patch, which is the same basic design, with different font, and the gray in the center of the circle is darker. 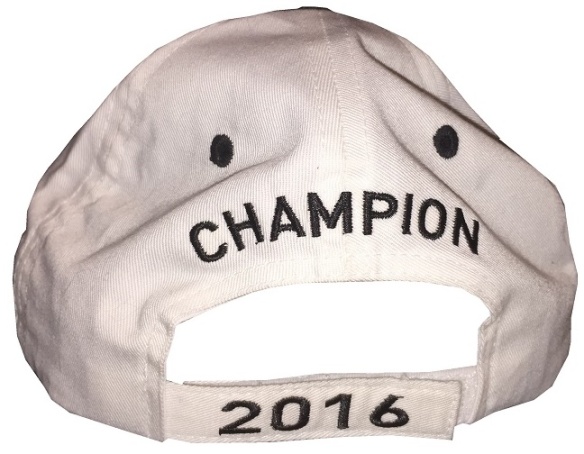 The right side is completely plain.

The top of the cap features six black eyelets, and a black squatchee.

The inside of the cap has a Main Gate tag, the cardboard is still present, and the words GO-ON-YELLO! printed on the black material of the under brim. 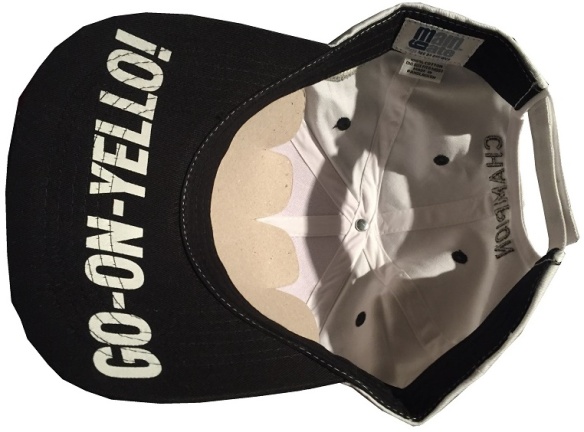 There doesn’t seem to be any reason why NHRA championship hats are white, and my best guess is that it was because John Force likes to wear white hats, but that is just speculation on my part. I have noticed that there is somewhat of an evolution of NHRA championship hats. I will discuss this in depth more next week.