I had originally scheduled this article for after the Route 66 Nationals, but sometimes, real life gets in the way. Shortly before the Route 66 Nationals, Terry Chandler who had been funding the Funny Cars of Jack Beckman and Tommy Johnson Jr. passed away from cancer. I wasn’t sure what the best way to proceed was, and I decided to put it off until I had some information I didn’t have, and wasn’t available at the time. Since then, her husband revealed that both of their cars will be funded through 2020. I was glad that happened, and I’m happy her legacy will live on.

I’ve discussed Jack Beckman on The Driver Suit Blog many times. He is a great driver, he connects with the fans, and he was kind enough to grant me an interview last year. I’ve been into the Infinite Hero Challenge Coin program since the beginning, and love collecting them. Well, I’m back with another profile of the coins for 2017.

Launched in 2011, The Infinite Hero Foundation “…is to combat the most difficult front line issues – mental and physical – facing returning military heroes and their families.” Military personnel returning from overseas deployment face long term employment, mental and physical problems that the majority of Americans don’t understand. They work with other non-profit veterans groups and give out grants to help service men and women cope with these long term problems.

In April 2014, they started appearing on the side of Jack Beckman’s funny car. Terry Chandler, who also sponsors Tommy Johnson Jr.’s Make a Wish Foundation Funny Car, is the financial backer of the car. She pays for Infinite Hero to race on the sides of the car. This also began the NHRA coin program. When Jack Beckman gets into his funny car to race, he carries at least 5 Infinite Hero Challenge Coins in the pocket of his driver suit. Once the race is over, he will autograph them and sell them at the track and on eBay. They cost $100 with all proceeds going to the Infinite Hero Foundation. 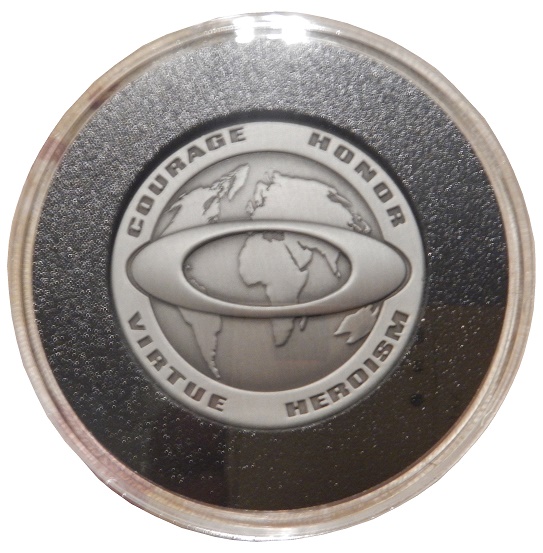 The 2014 design is quite thick, and has a ridged edge. One side featured “Courage, Honor, Virtue, Heroism,” around a globe design with an Oakley logo. Oakley is a partner with the Infinite Hero Foundation. The other side features an Infinite Hero Foundation logo with purple enamel. The coin was placed in a round, flat plastic container, with black foam braces. The coin lacks the blue enamel that the coin that comes with the glasses coin, and future coins, and has a very plain look. I do like the plain look. Jack used was identical to the one sold in stores. Jack autographed the plastic case. 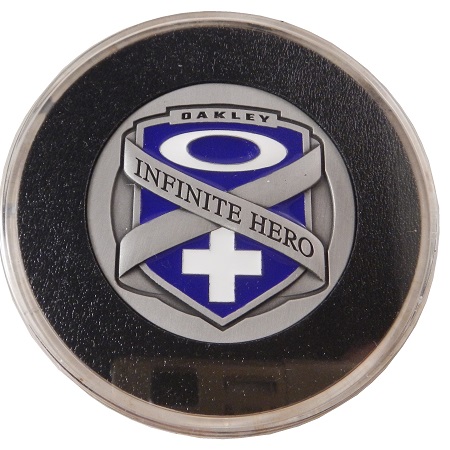 In 2014, this 1/24 scale die cast was produced. It is a full replica of Beckman’s funny car. Valvoline was a primary sponsor, and this was the only season Infinite Hero and Valvoline were together on the car. It’s also the only time that Infinite Hero Challenge appeared on the older Dodge funny car body. In 2015, the current body was introduced, and Pennzoil replaced Valvoline. Jack has autographed the windshield.

A redesigned coin of the same size was introduced for 2015. The Oakley logos are gone. One side features a design similar to the globe design, but the globe design has been replaced with an American Flag design. “Courage, Honor, Virtue, Heroism” has been replaced with “Duty, Honor, Innovation, Courage.” The new emblem on the reverse side has one of the across bands removed. The new packaging is an upgrade, with the circular plastic cylinder replaced with an attractive box. It comes with a card that Jack Beckman autographed, and on the reverse it has the Infinite Hero Foundation Pledge. The first one is from The CARQUEST Auto Parts NHRA Nationals at Phoenix on February 22, 2015, where Jack was eliminated in the first round. 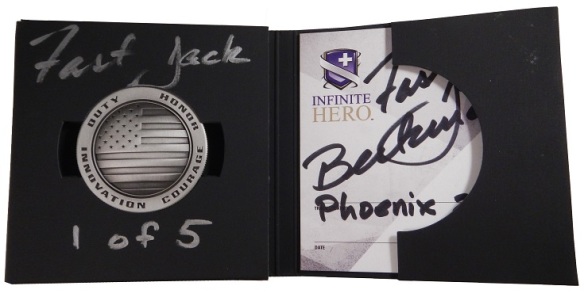 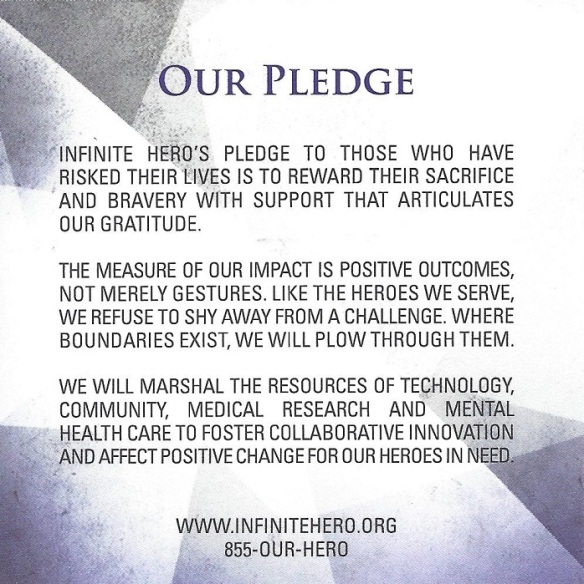 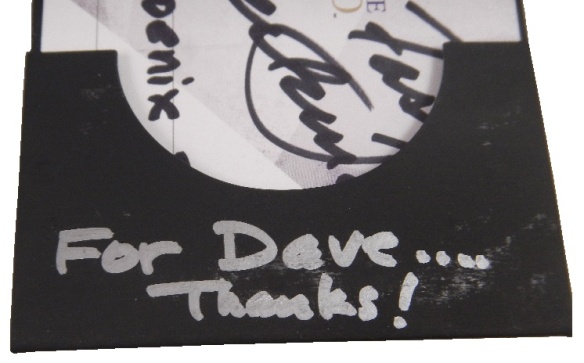 The second one is from the Summit Racing Equipment NHRA Nationals in Norwalk, Ohio, where Beckman won the event, beating Courtney Force in the final round. 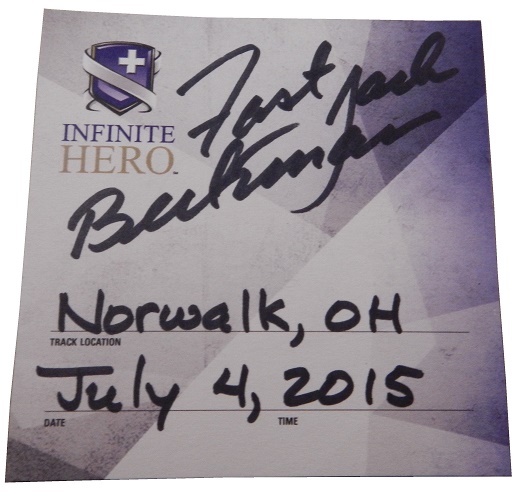 Also in 2015, these hero cards were produced. Hero cards are given away at racing events and driver appearances. They have Jack’s picture, and information about the driver, team, and the Infinite Hero Challenge.

For 2016, the coins got a major makeover. The Infinite Hero logo is now bigger. The words “Reimagine” and “Recovery” are stamped near the logo, and on the opposite side, a picture of Jack’s funny car replaces the flag motif. It should also be noted that the coin is slightly smaller, because it isn’t as tight in the coin case as the previous version. The Infinite Hero Pledge accompanies the coin. Also changed from 2016, Jack doesn’t sign the box and the pledge, he just signs the pledge.

The 2017 Infinite Hero coin is slightly larger than the 2016 coin, and fits snugly in the box. The pledge piece remains unchanged. The coin itself has a plain pewter Infinite Hero Challenge logo on one side, and a blue enameled claw stripe design with a hex nut design on the border. 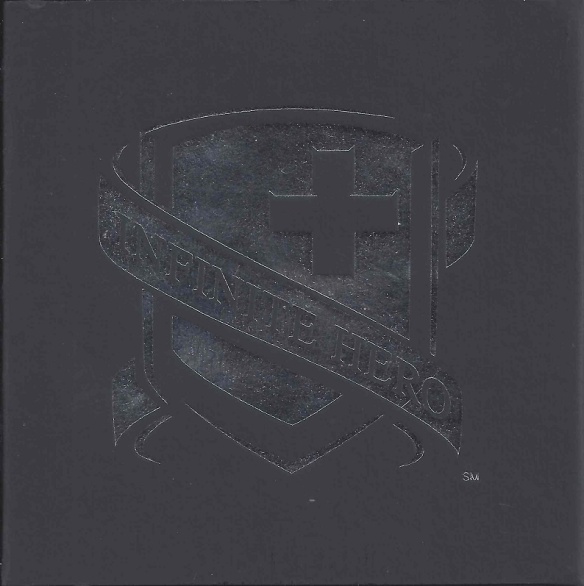 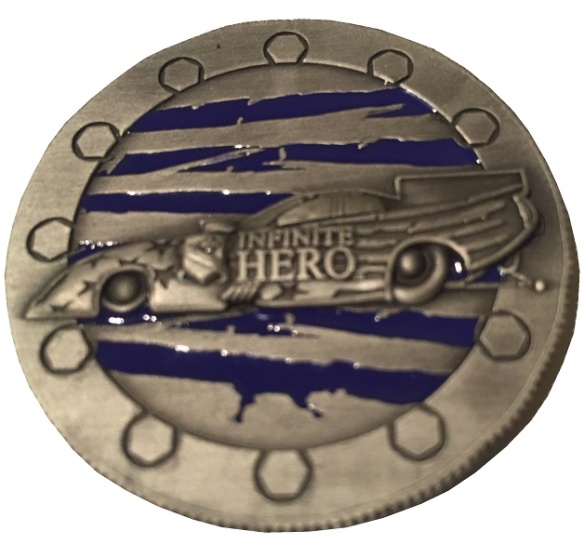 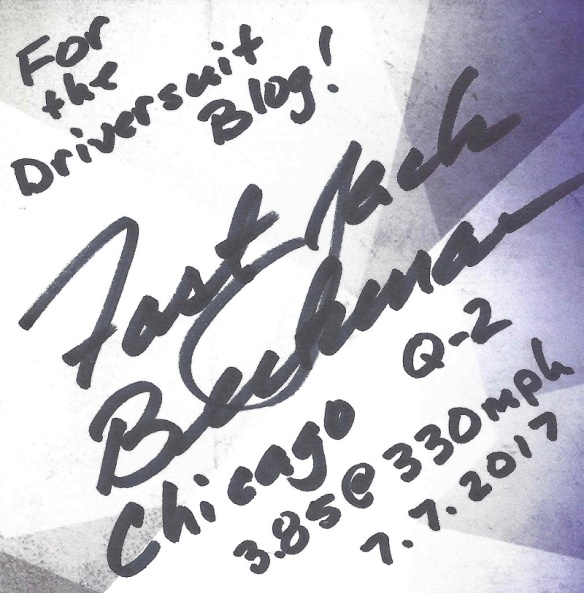 Hero cards are given away at racing events and driver appearances. They have Jack’s picture, and information about the driver, team, and the Infinite Hero Challenge. For 2016-2017, a new card design was introduced. It has updated information, as well as the updated paint scheme introduced at the beginning of the season. 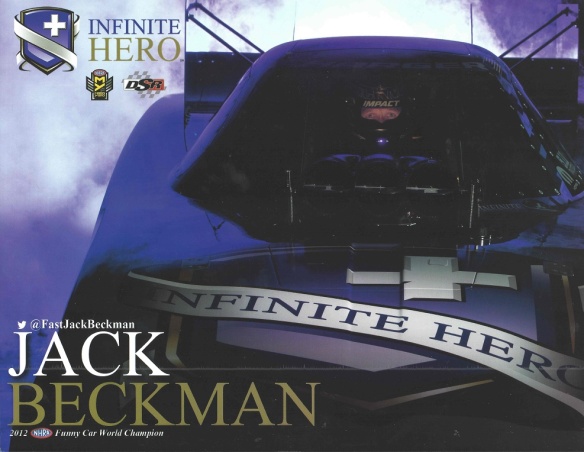 Recently, I took a number of selfies with race car drivers, and made them into a book, and got them signed. This is me with Jack Beckman. Hector Arana signed the upper-left corner.

Jack Beckman is a great driver, who races for a great sponsor, and supports a great cause. He has been really amazing not just to me, not just to to The Driver Suit Blog, but to the NHRA and their fan base. I’m glad he’s going to be racing for The Infinite Hero Challenge until 2020. As long as he is selling them, I will continue buying the Infinite Hero Challenge Coins, and promoting them on The Driver Suit Blog.

Next Week, we will continue something I started in July…