We’re going to do things a little differently this week. This pair of racing boots has been interesting to research, and I’ve decided to go ahead with I have found out about these boots. Let’s start out with what I know for sure. They are a pair of Puma Future Cat Hi Pro P boots, red and white in color, which show decent use. Matt Halliday’s signature on each side, with the inscription “2007” on each side. Now let’s see why there is more to these than meets the eye.

In addition to the signatures, I purchased these from Matt Halliday’s eBay page. He stated that these were boots he wore during the 2007 Champ Car season, during which he raced three races for Eric Bachelart and sponsored by 42 below, at Las Vegas, Long Beach, and Houston, where he didn’t score a top 10 in any race. The boots show wear consistent with this. 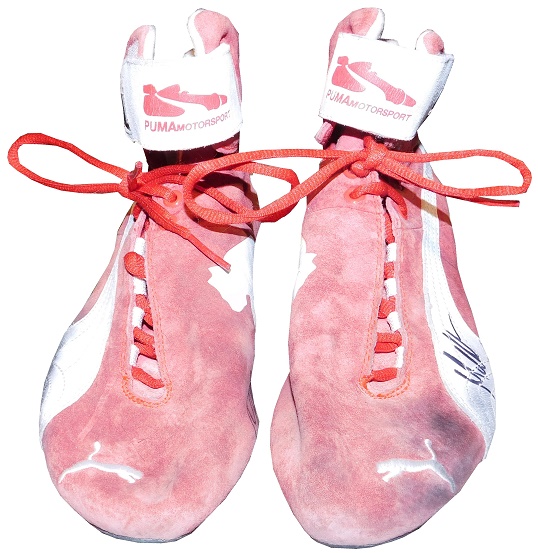 The right boot shows use, with discoloration, scuff marks, and Matt Halliday’s signature with the inscription “2007” on the inside near the Puma logo. 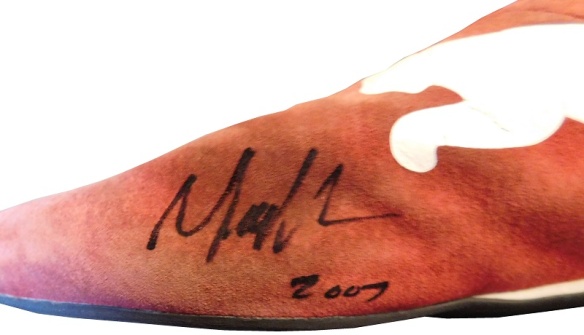 Now here comes the odd thing. The tag on the tongue has the name Daniel Gaunt written on the tag in Sharpie.

The boots do not show heavy use. It doesn’t appear to me that they were used by multiple drivers for multiple seasons. Also, since the two never raced together on the same team, it seems unlikely that this was a team decision to give Matt these boots. It should also be noted that in his Champ Car pictures, Halliday can clearly be seen wearing a pair of Pumas, so were these boots prepared for Gaunt and used by Halliday? That could be, especially if the boots weren’t right for Gaunt, but right for Halliday.

The left boot shows some discoloration, and some scuff marks, and has been signed by Halliday on the outside on the white, again with the “2007” inscription. 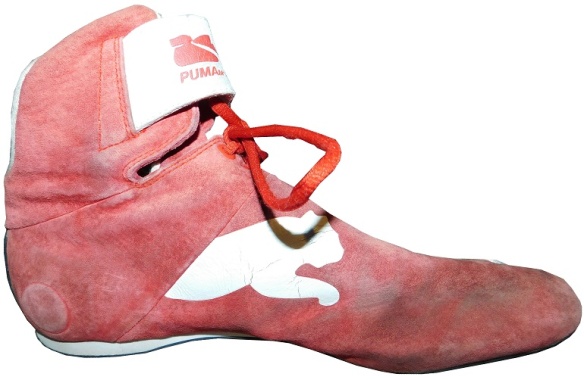 Like the right boot, the tongue has DANIEL GAUNT written in Sharpie on the tag.

I’m not sure what to make of these boots. Matt Halliday claims he wore them during his one season in Champ Car, and maybe he did. There is evidence he wore Pumas during his time in Champ Car, and since drivers will wear more than one pair of shoes during a season, it’s likely he is telling the truth on that. It’s also theoretically possible that since he also raced V8 Supercars in 2007, that he could have worn the boots in both.

Based on the amount of wear the shoes show, I don’t think they were worn by both drivers. Race car drivers are control freaks, and their uniform choices reflect this. Now if Daniel Gaunt wore them once or twice testing his car, and didn’t like them, and didn’t want to wear them, and gave them to Halliday, that could explain it too. The fact that these came from Halliday, and he stated that he wore these during his Champ Car career is telling. Since these two have only raced a total of six races together in their careers, it’s possible that they are friends outside of racing. Both were born in Auckland, New Zealand, and both rose through the racing ranks to get to the top of their careers, so it’s a real possibility.

In any event, these are a beautiful pair of racing boots, which, while minimalist, are well designed and attractive. They have been an interesting thing to research, and I had fun with it. Next week, we will look at some NFL stuff to commemorate the start of the season.