In NASCAR, there are usually two kinds of teams: big and small. The big teams include Stewart-Haas Racing, Hendrick Motorsports, Team Penske, Chip Ganassi Racing, Joe Gibbs Racing, and Furniture Row Racing. Big teams are multi-car teams that are championship caliber, and have little if any trouble with sponsorship issues. Small teams are teams like Tommy Baldwin, Germain Racing, Premium Motorsports, BK Racing, The Wood Brothers, Go FAS Racing, Circle Sport/TMG, Rick Ware Racing, and Leavine Family Racing. These teams, while they may have more than one team, are often underfunded, have mediocre drivers and on track results.

Interestingly, there is a third group, which could really either be considered big or small, depending how one looks at them. These teams include Richard Childress Racing, JTG Daugherty, Richard Petty Motorsports, Roush-Fenway Racing, and Front Row Motorsports. These are all teams that while they have multiple teams and decent sponsorship, they aren’t championship caliber, even though they do often make the playoffs and win races. The have a decent driver or two, and have decent fan bases. One of the most well-known and least appreciated of these teams is Front Row Motorsports.

Founded by Bob Jenkins and Jimmy Means in 2005 as a single-car team, the original team merged will Mach 1, and began a two-car operation. Eventually, the team shad as many as three teams, with two full time. Since team owner Bob Jenkins owns over 150 franchises from Yum! Brands, including Taco Bell and Long John Silver’s, as well as Morristown Driver’s Services or MDS, those sponsors frequently appear on the sides of his cars. While the team hasn’t shown much strength on many tracks, they show strength on superspeedways.

Mach 1 Motorsports, which would merge with Front Row in 2005, was founded by William Edwards in 2004, and raced with Randy LaJoie, Todd Bodine, Geoff Bodine, Larry Gunselman, Derrike Cope, Chad Chaffin, Jeff Fuller, P.J. Jones, Ted Christopher, and Mike Skinner in 35 races from 2004 to 2005. The team was a failure, failing to score even a top 10. While Randy LaJoie raced the #34, everyone else raced the #98, except Mike Skinner, who raced the #00. During their run, a crew member wore this vest/shirt pit crew suit.

Obviously, being a minor team searching for sponsorship, this Impact! vest/shirt combination was used. The vest could be swapped out if a sponsor was found for a race, or even a season. The vest itself is in good condition, though some race wear is present. The undershirt doesn’t show that much wear.

The vest shows some scuff marks from race-use. 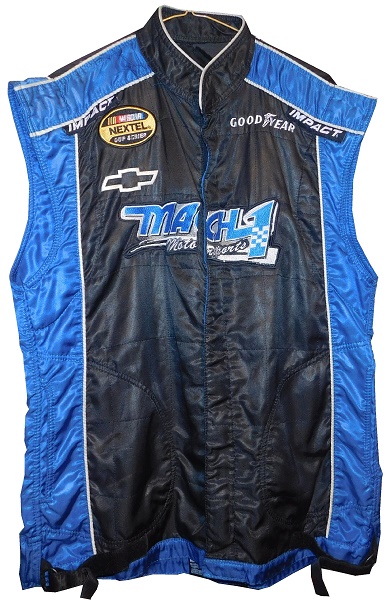 The collar is unadorned, and there is no tag in the cowl. 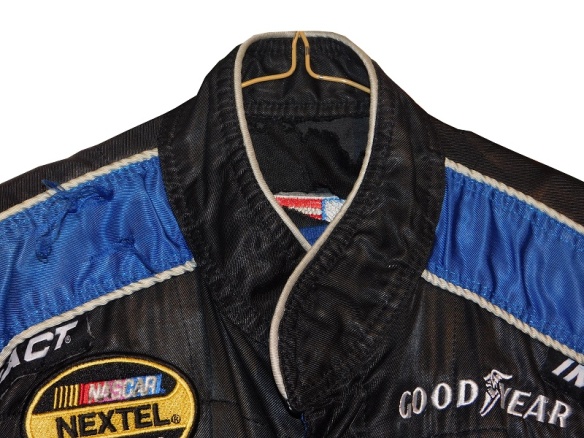 The right chest features a NASCAR NEXTEL CUP SERIES logo and a Chevy bowtie logo embroidered into it. 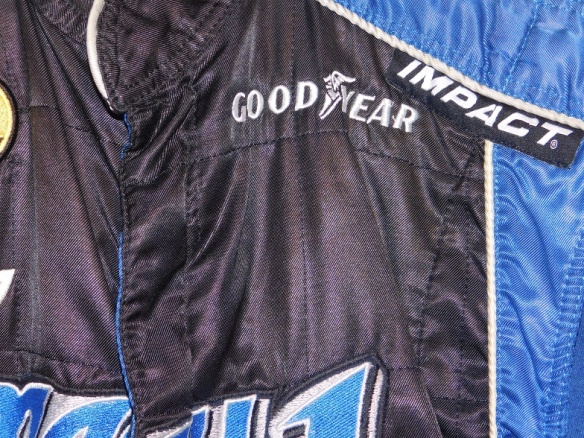 The front torso has a MACH 1 MOTORSPORTS logo present.

Underneath the front logo, next to the zipper is the Impact warranty tag.

Impact has special Velcro adjustment straps on the hem, and this vest is no exception. 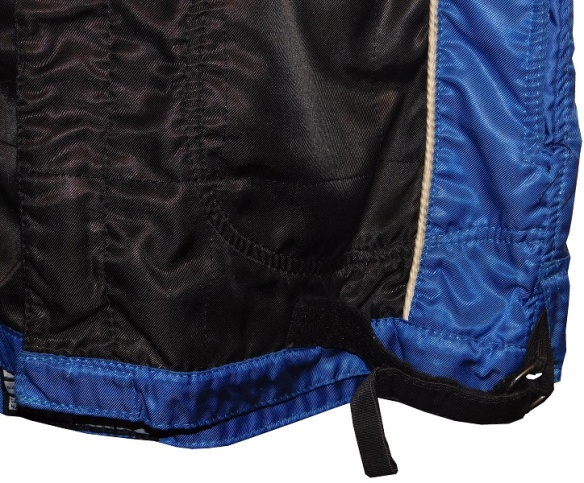 A second Impact tag is in the bottom of the hem, in the rear, and has the name J MAZZA written in faded Sharpie.

The vest epaulets are blue strips with white outlines, with no logos present. 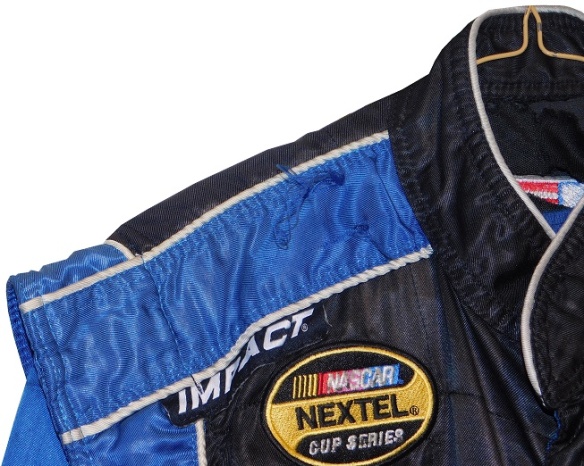 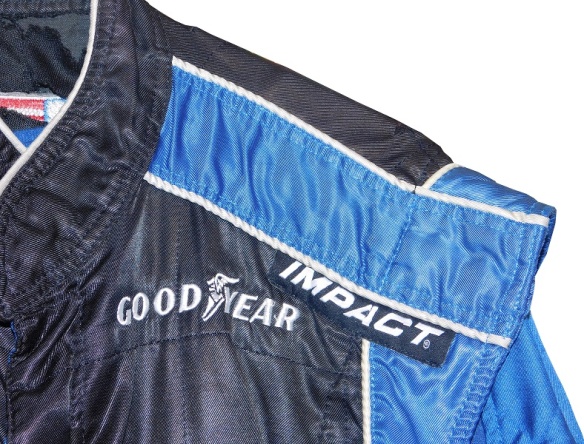 The rear of the vest shows some scuff marks below the logo. 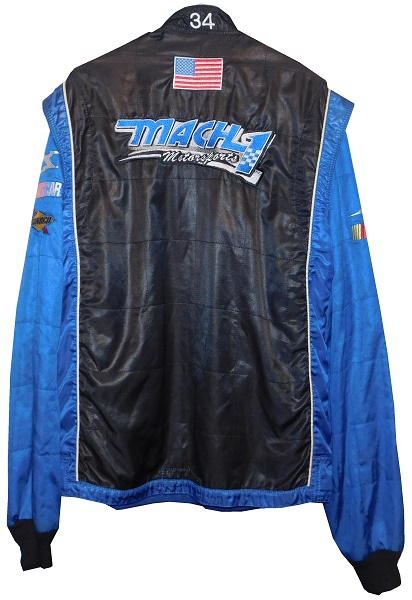 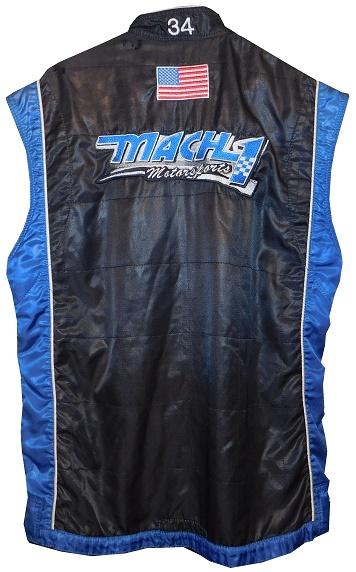 The back of the neck features 34 embroidered into the collar, and an American Flag patch sewn just below it.

Just below the American Flag patch is a MACH 1 MOTORSPORTS logo, embroidered higher than the logo on the front.

While the shirt did see race use, it doesn’t show any wear to speak of.

The collar doesn’t have a tag, but it has an Impact logo on the back of the neck, and the name Adam is written in faded Sharpie in the square. 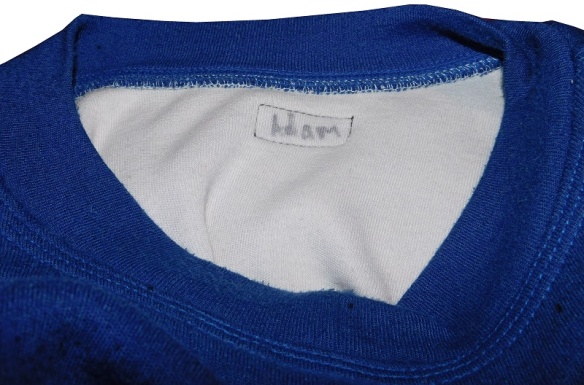 The front of the shirt is unadorned blue Nomex.

The shoulders are unadorned. 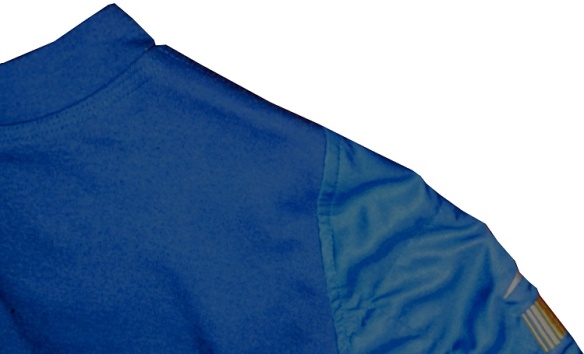 The left sleeve has an IMPACT Z logo, a NASCAR logo, and a SUNOCO logo, with no logos in television position.

Aside from the small Impact patch just below the neck, the back of the shirt us unadorned, and shows no wear. 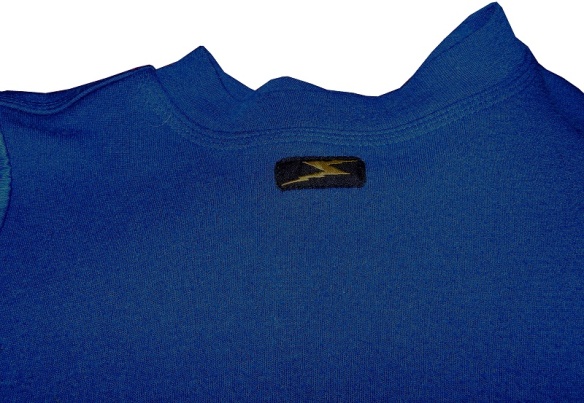 Front Row Motorsports is a small team but they are making an impact in the Cup Series. They have two wins, and have decent showings, especially at superspeedways. They also have a history in the Xfinity Series, which we will examine next week.