In 1985, after winning 10 top alcohol event wins, he got his “nitro license” and joined the top fuel ranks. While his first season was unremarkable, he would win four races in 1986, and come close to beating Don Garlitts for the top fuel championship. From then on, he would win a total of 18 races from 1986 to 1990. He would be a factor in the championships in all of those seasons. His last win was at the 1990 Gatornationals.

Sadly, his career didn’t have a happy ending. In 1990, at an event at Santa Pod Raceway in Podington, Bedfordshire, England, he was racing, when his car broke, and crashed at 240 MPH. Darrell survived, but was left paralyzed, thus ending his racing career. Gwynn would continue in the NHRA, not as a driver, but as an owner. He would race with Frank Hawley, Mike Brotherton, Mike Dunn, Andrew Cowin and Cory McClenathan, and earn 15 national event wins. In addition, he works for the benefit of those with spinal injuries.

At the 1985 Southern Nationals, Don Garlitts beat Joe Amato to take the event Wally, but the best looking car Wally would go to Darrell Gwynn, in his 1985 Dave Uyehera made top fuel dragster. I recently acquired the Wally from the event, which Darrell has autographed.

It’s in great condition, and shows some light signs of age and wear.

Darrell has signed the base in black Sharpie. 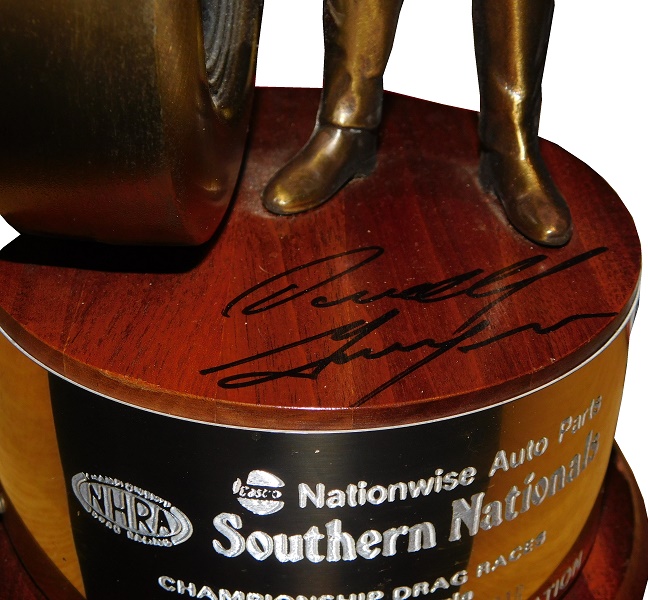 In many ways Darrell Gwynn’s story is the same as many other drivers. A hugely talented and driven individual gets to the big leagues, shows a lot of talent, impresses a lot of people, then has a big wreck, and his career either ends, or is never the same afterwards. It’s a sad fact of auto racing that there are many drivers who haven’t had the careers they should have because of bad wrecks. Darrell’s story should be heard by many young drivers, since it could happen to them. Next week, we’ll look at a shirt worn by an underappreciated top fuel legend.