Love him or hate him, you can’t disagree with the fact that Robby Gordon LOVES to race. From five SCORE International championships, to three Baja 500 wins, three Baja 1000 wins, two wins in IndyCar, three wins in the Cup Series, and one win in the Xfinity Series, Gordon can win in any series he is in. Gordon also founded the Speed Energy Formula Off-Road series in 2012.

Gordon is the son of Robert “Baja Bob” Gordon, and grew up with off road racing. He got his start in off-road racing, and transitioned into other forms of auto racing. In his early SCORE days, Robby preferred Ford over all others. This continued in to the 1990’s, though he would never be a part of the famed Ford Rough Riders.

I recently acquired two firesuits supposedly worn by Robby Gordon’s pit crew during the early 1990’s. Research on SCORE stats and information isn’t as easy as NASCAR or IndyCar. However, I have reason to believe that these two suits date between 1994 and 1995. I’ll start with the first one, a non Nomex example, which shows some light wear.

The front collar is a Velcro design with a FORD logo embroidered into it.

The cowl tag is a Simpson non Nomex variation, with two flag tags. One is a size tag indicating M, the other is a made on tag indicating it was made in 8/91.

Here is the first indication that this was used in SCORE, the right chest patch features an ULTRA CUSTOM WHEEL patch sewn into it. 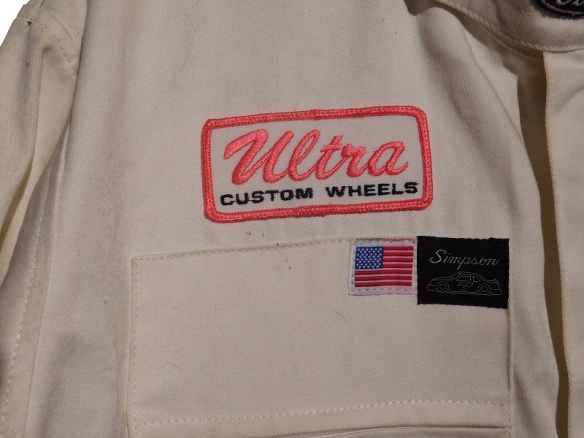 Evidence indicating that these suits date to 1994-1995 is on the left chest. Sewn into the material, which feels rather unusual, almost like a dipped polyester, is a VALVOLINE patch, and a SHILO INN patch. These two logos are clearly visible in all photos of Robby’s CART rides in 1994 and 1995. All of the chest logos are also visible in what few photos I’ve been able to find of Robby’s SCORE rides in 1995.

The front torso doesn’t have any logos adorning it, nor does the belt.

The legs are unadorned, and have standard cuffs.

The shoulders have no adornment, and the sleeves have three red stripes on the upper sleeve, and nothing on the lower sleeve. The left sleeve has a SIMPSON patch. 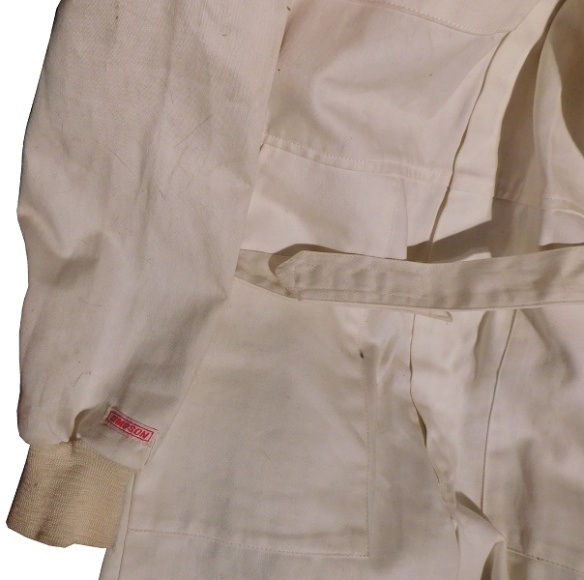 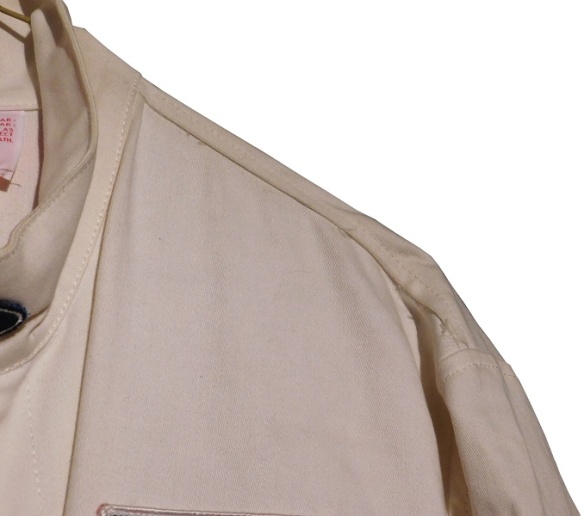 The back of the suit shows some light wear.

The back of the neck has no adornment at all.

The back torso has a large FORD blue oval patch sewn into it.

I’m fully convinced this is a SCORE suit and not a CART suit. First off, no crew member would be dumb enough not to wear a Nomex suit. Second, the lack of customization is a telling piece of evidence. Between photos and videos, I’ve been able to determine that Gordon wore a blue suit in CART. While there is evidence that Gordon at the very least wore a suit with some customization, for a SCORE crew in that era, it doesn’t seem so far fetched that they would wear a cheap suit with some patches while working on the truck. Based on all of the above evidence, I can safely say that this is a SCORE pit crew suit from 1994-1995, more than likely 1994.

I have a second pit crew suit from Robby Gordon’s SCORE team, possibly from 1995, which we will examine next week.